The economy at the beginning of the 21st century has already shown that economic growth and employment do not follow the same direction and, therefore, an economy can be in constant growth, but its unemployment rate can not be diminished, with the income of the I work the main source of the middle class to access wealth.
This situation has been caused largely by technological progress, mainly robotization and Internet, along with the relocation of industry in the West, part of the reasons why unemployment and job insecurity have been installed in most of the countries. the countries the European Union and the United States
In this sense, the new alternative financing mechanisms such as crowdfunding have allowed financing new business projects and businesses, which with traditional financing mechanisms such as banking, could not have been developed. This same trend has continued in Spain, where crowdfunding financing platforms have experienced great growth, both in number and in economic volume, with a commitment to present and future for private investment in Spain.
The emergence of these alternative financing mechanisms is the adaptation to the new demands established by the economic situation and the evolution and trend of many venture capital companies, which have found in crowdfunding, an alternative or diversification of their business model. 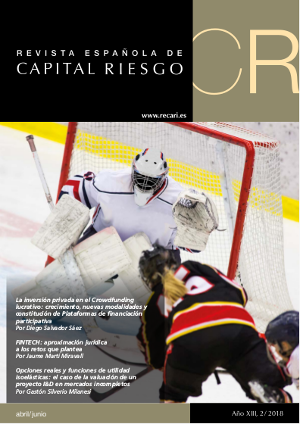